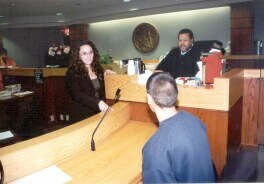 The Office of the District Attorney of Orange County has the responsibility to enhance public safety and welfare and create a sense of security in the community through the vigorous enforcement of criminal and civil law in a just, honest, efficient and ethical manner.

The District Attorney's Office represents the People of the State of California in prosecuting youth who have been accused of committing a crime and there is sufficient evidence beyond reasonable doubt to support the accusation.

The District Attorney is responsible under the Welfare and Institutions Code of the State of California for the following:

When the probation officer determines there is sufficient evidence to support a criminal case against a youth, they will file an "Application for Petition" with the District Attorney's Office. If the youth is detained in Juvenile Hall, the District Attorney's Office has 24 hours for misdemeanors and 48 hours for felonies (excluding weekends and holidays) from the time of the arrest to file the charges in Juvenile Court. If the youth is released to their parents and the charges are filed, the youth is sent a notice to appear in Juvenile Court a few weeks later.

Even when the evidence is sufficient, the District Attorney has the option to return the case to the probation department for informal supervision. Under informal supervision, youths are required to observe good behavior for a period of approximately six months, and a restriction of activities and community service may be imposed.

The attorneys of the District Attorney's office work with investigative law enforcement personnel and legal clerical support to process approximately 10,000 juvenile petitions for wardship each year.